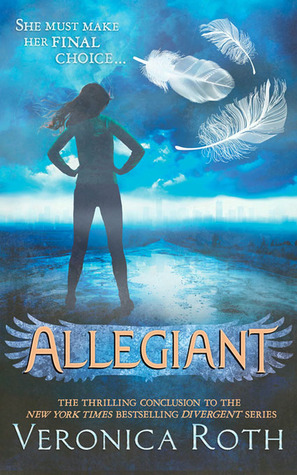 What if your whole world was a lie?
What if a single revelation—like a single choice—changed everything?
What if love and loyalty made you do things you never expected?

The faction-based society that Tris Prior once believed in is shattered—fractured by violence and power struggles and scarred by loss and betrayal. So when offered a chance to explore the world past the limits she’s known, Tris is ready. Perhaps beyond the fence, she and Tobias will find a simple new life together, free from complicated lies, tangled loyalties, and painful memories.

But Tris’s new reality is even more alarming than the one she left behind. Old discoveries are quickly rendered meaningless. Explosive new truths change the hearts of those she loves. And once again, Tris must battle to comprehend the complexities of human nature—and of herself—while facing impossible choices about courage, allegiance, sacrifice, and love.

I have literary just finished this books and I don’t know what to do with myself and the information I have!. My friend is only just started it and we have all promised Veronica Roth not to post spoilers so I am trapped with my feelings!. This was a really great end to the series. Getting to read from Tobias point of view as well as Tris was great although it took a  couple of chapters to get into the mind set of not every chapter being her.  I think the fact that he is Tobias and not Four really reflects how his character has changed since Tris has been in his life and he continues to discover things about himself through out this story. As does Tris. Everything they have known is questioned when they discover beyond the gates. They each have person battles to deal with but their relationship is also challenged. Seeing what they need in one another and learning what love really means to them features just as much in this story as the dystopian aspect. The romance and it’s challenges fitted in perfectly though, well balanced and beautifully written. As for the truth, it doesn’t make their lives any less complicated and they aren’t about to sit back and loose any more.
I feel I can’t say any more about the story than this. I don’t want to just summaries the plot and I think my feelings about the end might reveal too much. All I can say is if you have read the first two in this series go and get your hands on this one NOW!.

I wanted to add a bit more to this review now I have had a night to sleep on it. I still can’t get over what I have read but I do think it was the right thing for the story, The series has always been about Tris and her choices, despite the dystopian society and with this ending we really see that dauntless was the right choice. I think this book does have slightly less action than the others, and some people may think they too easily loose sight of what is going on inside the gates but for Tris to develop she needed a new environment. The chapters from Tobias point of view also could have benefited from not sounding exactly the same as Tris but his side of the events was needed to complete the picture of the world they are dealing with. I still love this as the last book in the series and it will be going down as one of my best in the year, I just wanted to balance my review out a little now I’m over the emotional response.