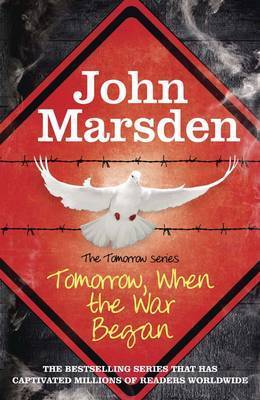 When Ellie and her friends return from a camping trip in the Australian bush, they find things hideously wrong — their families are gone. Gradually they begin to comprehend that their country has been invaded and everyone in their town has been taken prisoner. As the reality of the situation hits them, they must make a decision — run and hide, give themselves up and be with their families, or fight back.

I have only really just put this book down and I don’t like to start a review negatively but I feel disappointed by this book. Since I started my dystopian challenge this is a book I have been really interested to read but having read it I’m not totally convinced I would count it as dystopian. It is the story of a group of friends who go off camping to a remote part of the bush and when they return it has been invaded. They work out roughly what has happened and so put together supplies and return to their camp to decide what to do. The book is being written by Ellie, who has been nominated to record everything that has happened to them so far. As a result of this we get to live through her emotions as the story unfolds but what annoyed me was that it included a love triangle. I know this book is 11 years old and before the fad but it still always puts me off a story. Whats more I just didn’t find it an understandable thing to be worrying about giving else that was going on. The disappointment however was the actual story, it just didn’t feel realistic. Some of the things that are said and the actions they take are pretty extreme and I just don’t think teens would act that way in that situation. Maybe that is me just being cynical but it didn’t work for me. The thing I did like though was the look at evil and nature. Ellie is really interested in these concepts and her musings about them are interesting to think about. Overall I didn’t hate this book I just didn’t feel that excited by it. It was an easy read and I don’t think I will read any more of the series but I will try the film.