This weeks Top Ten Tuesday from The Broke and The Bookish (http://brokeandbookish.blogspot.com/p/features.html) is Top Ten Front covers. They are in no particularly order but I have given some, if poor, reason as to why I like them. ( P.S. I never did last weeks Top Ten as I found it too difficult in to short notice)

Twilight I am ashamed to say that the reason I bought Twilight was because I liked the cover. So for that reason it has to be on here.

The Saga of Darren Shan (trilogies) I like the way that the land on the trilogies joins us, but I also enjoyed speculating who the character in the front was. I guess it is meant to be Darren but it could easily be Mr Crepsly or Des Tiny ?? 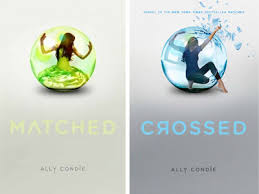 Matched and Crossed I love how these covers portray the overall idea of the story. They are very pretty but also symbolic. I hope the third one keeps to the same theme.

Switched I read this book before it was published as a paper book and it was the first of those covers it came with, however I love the new cover now she has them out in shops. I don’t know if this should count as two but it’s the same book so tough.

Forbidden I love this cover, it is so simple but shows just how complicated love can be, it is both strong and dangerous.

Private Peaceful I think this cover very respectful portrays that the story is about war without putting of the younger readers it is aimed at. It isn’t the cover on the copy I read but I find this one far nicer.